Baratang island is located between Middle and South Andaman Islands. Approximately, 110 Kms from Port Blair, Baratang Island is another major attraction for most of the tourist visiting the islands. What would you expect when you visit a tropical island? Dense Forest, Tribes, Mangroves, boats, beaches, birds, caves, trekking, volcanoes; Baratang has all of these to offer.

Journey to this Island is an adventurous one. Your trip starts early in the morning from Port Blair in a shard vehicle, usually a Government Operated tourist bus. The bus takes its route through the Andaman Grand Trunk road, which connects Port Blair to South, Middle and North Andaman. Soon you would leave the city behind and pass through scarcely populated areas. The jungle along both sides during your travel would be a treat to watch. On your way you would pass through Jirkatang, couple of decade ago people feared to stay or pass through these places because of attacks by the native tribes who usually used to come to these places in search of food. Until recently, government has made efforts to help and protect these tribes after which the attacks on people staying or passing through these places were reduced. After reaching Jirkatang, the bus would take a pit stop for some refreshment and a couple of security personnel would board the bus for safety of both travelers and tribes. You would now pass through the Jarawa Tribe reserve, the reserve controlled and operated by government for protection of the Jarawas against diseases from which they do not have natural immunity. The government also provides medical aid to these indigenous tribes. 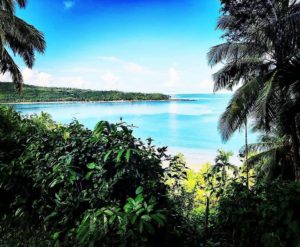 On your way from Jirkatang to Middle Strait you might get an opportunity to see these tribes along the road. It is recommended not to offer any food or take pictures of these tribes during this time. Interacting with them, giving them food or clicking their pictures is strictly prohibited and is a punishable offense. After passing through the tribal reserve you would reach Nilamber Jetty. You would then be transferred to a vehicle ferry, which would take you to the Baratang Island. These ferry can accommodate buses, trucks, cars & bikes. Upon reaching Baratang Jetty you could take a dongi(boat), these boats would take you through dense mangroves to reach the starting point of your journey to reach the Limestone caves. The journey to the cave is a lifetime experience for some. Pass through walkways made by cutting through dense forest and large stones. Inside the cave the temperature is lower than outside. The cave contains beautiful cave formation. Limestone is mostly made up of the mineral calcite (calcium carbonate). Limestone is very soluble, meaning it is easily dissolved. Rain water picks up carbon dioxide in the air and a weak solution of carbonic acid is formed. This water can dissolve limestone over time, creating a cave. Travelers can also plan to visit Parrot Island and Rangat. You would have to stay at Baratang for Parrot Island and should stay at Rangat if you planned to visit Havelock from Rangat.

While returning to Port blair, all vehicles wait at the check post at Baratang jetty. Once all the vehicles have reached the check post, the check post gate will be opened and vehicles can go in groups. The normal time of opening this gate is at 2.00 pm. Security people board front and back vehicles (with rifle). The same forest journey can be experienced till the starting check post towards Port Blair.